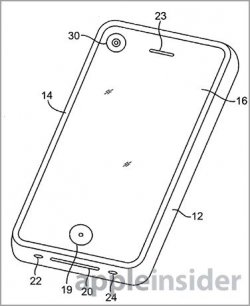 ​
&#8203;There was this show on TV called &#8220;Lie to Me&#8221; where a doctor could determine whether you were lying or not just by looking at your face and detecting micro-expressions. Micro-expressions are those twitches you involuntarily make with your face, when you like something or you&#8217;re afraid of it or disgusted. We basically can&#8217;t help it.

And with this new patent uncovered this week, Apple makes us think it might be building a lie detector. The application is called &#8220;Electronic Devices with Gaze Detection Capabilities&#8221; and it describes a mobile device that is capable of reacting when your eyes or head moves. Of course this is just the paranoia talking, imagining a device that could end up monitoring your pupils&#8217; dilation and head tilts, in the process revealing the deepest of thoughts.&#8203;&#8203;

But actually what Apple proposes in the patent is far more innocent. The application details a system that allows the screen to be dimmed if the user&#8217;s head is not in close proximity to the gadget. What if you are watching a video but suddenly you hear a scream outside and you need to run out and check it out? The device not being able to make &#8220;eye contact&#8221; will automatically pause the video.

The technology is however available on the market and implemented in the Samsung Galaxy S 4 and LG has released a similar eye tracking system called SmartVideo. Samsung took the necessary precautions and patented the technology entitled &#8220;Eye Pause&#8221; on the 24th of January 2013.

However, the initial patent filed by Apple with the Patent and Trademark Office dates back to September 20, 2008, but included other inventions and ideas as well. Still we can&#8217;t help but fear another war unleashing between the two giants.

Source: PatentlyApple
Last edited by a moderator: May 31, 2013
You must log in or register to reply here.