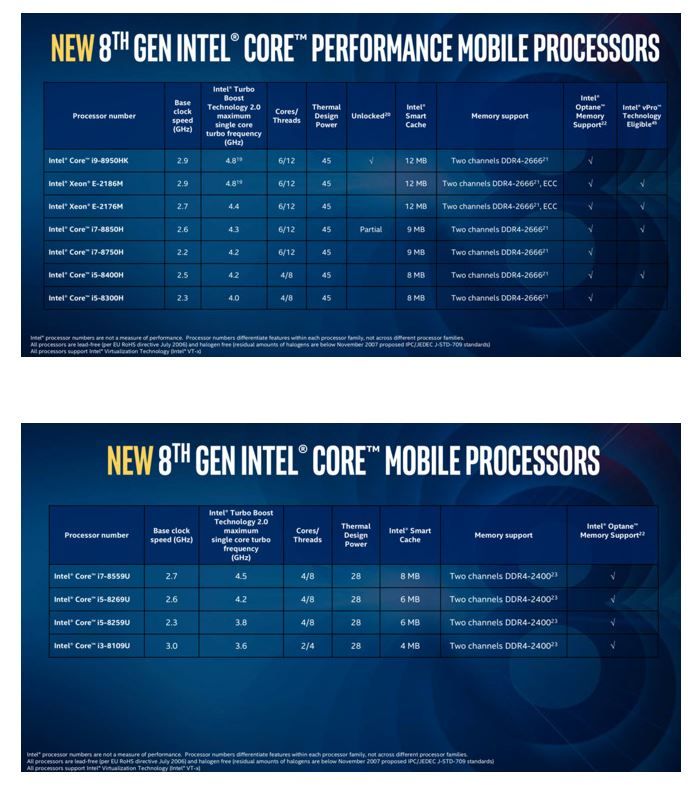 Intel has today launched its brand new Coffee Lake laptop processors, bringing its Core i9 range to laptops for the first time in a thermal profile that the current 15-inch MacBook Pro can use.

AppleInsider writes that the newly announced six-core i9-8950HK has a base clock speed of 2.9 gigahertz, with Turbo Boost speeds up to 4.8 gigahertz on a single core. Despite all this power, the new chip still has the same 45-watt thermal design power as the current 15-inch MacBook Pro’s quad-core 2.8-gigahertz Core i7.

This means that, in theory, Apple could offer this new chip as a high-end custom option in its next iPad Pro refresh that would appeal to users with heavy computing demands such as running Final Cut Pro X, especially with Apple having updated the app with 8K video support and 260-degree VR video for Motion and Compressor last December.

The new processors do not support LPDDR4 memory, still using the LPDDR3 memory used in the 2016 and 2017 MacBook Pro range, meaning that RAM is limited to 16GB. This means that if Apple opts to use 32GB of RAM in a new MacBook Pro, it would have to use DDR4 RAM and a suitable controller, both of which would greatly affect battery life.

Any news for the price tag of the 2018 MacBook Pro?

pixelanimated said:
Any news for the price tag of the 2018 MacBook Pro?
Click to expand...

Not until the official announcement.
J

Jello
You must log in or register to reply here.