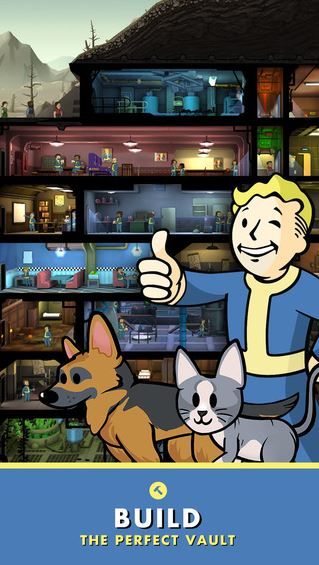 Looks like the Vault-Tec boffins have been hard at work in the design bunker with Bethesda Game Studios launching a new update for Fallout Shelter that includes vault-dwellers being able to have pets, including the famous Dogmeat, who has appeared in many games in the Fallout series.

It seems that the main thrust of this latest update is all about the vault-dwellers' comfort and quality of life, with the bunker inhabitants now able to have their own pets in order to enhance their happiness, and, of course, their productivity!

To the same end, Vault-Tec has also decided to put a stop to the epidemic of laziness that has infested some vaults faster than an army of radroaches! From now on, therefore, Overseers can permanently evict any layabouts or slackers into the Wasteland.

And for those vault-dwellers still having no luck when it comes to finding a mate, the update introduces some new conversation lines with which to impress other dwellers and prospective partners.

Aside from aiming to enhance vault-dwellers’ health and wellbeing, Vault-Tec has also introduced some new efficiency measures to aid in the smooth running of your vault, including a new “sell all” option to help you get rid of excess inventory in one fell swoop, as well as general dweller management improvements and new objectives.

Sources: Bethesda, Fallout Shelter introduces Dogmeat and other pets to the vault
You must log in or register to reply here.

Smurfs' Village Gets Powdered in Snow in New Update