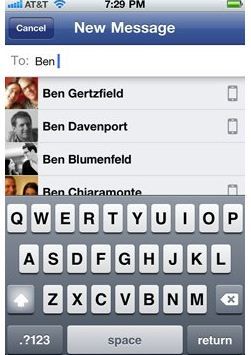 MacRumors reports that during a public Q&A session yesterday, Facebook CEO Mark Zuckerberg addressed the issue of why back in July Facebook made users download a separate Facebook Messenger if they wanted to send messages to their Facebook friends, instead of being able to message them via the Facebook app, as previously.

According to The Verge, Zuckerberg told the audience that Facebook separated messaging into its own app because the company thinks that a dedicated messaging app is “a better experience.”

Zuckerberg added that he and his team studied other successful messaging apps, and found that they all concentrated on just one service, namely, delivering messages. Facebook also wanted to cut out all the extra steps that were involved in sending a message via the main Facebook app, which they consider to be primarily a news feed, not a messaging service.

“Messaging is one of the few things people do more than social networking,” said Zuckerberg. “In some countries 85 percent of people are on Facebook, but 95 percent of people use SMS or messaging. Asking folks to install another app is a short term painful thing, but if we wanted to focus on serving this [use case] well, we had to build a dedicated and focused experience.”
Click to expand...