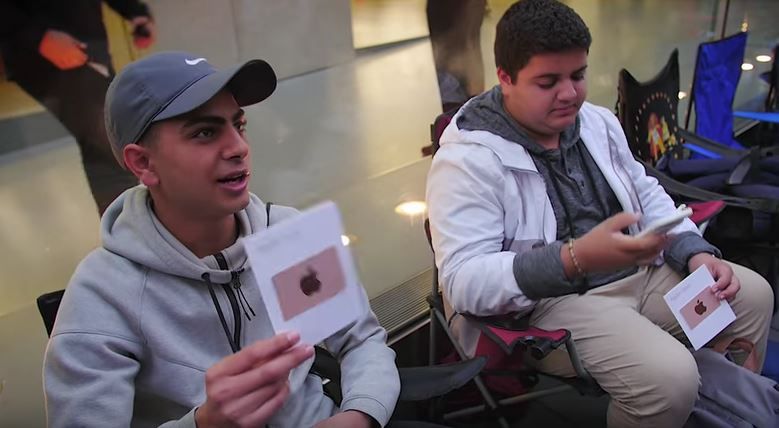 On the eve of the release of the iPhone 7 and iPhone 7 Plus tomorrow, Apple has released an official statement announcing that the jet black iPhone 7 has completely sold out, as well as all finishes of iPhone 7 Plus, on pre-orders alone. This means that there will be no jet black iPhone 7 units or iPhone 7 Plus units available to those currently lined-up outside Apple stores hoping to walk up and buy them tomorrow.

9to5 Mac reports that Apple has said that the only iPhone 7 units that will be available to walk-up customers tomorrow will be “limited quantities” of 4.7-inch models other than the jet black models. In the statement, Apple said that it “couldn’t be happier with the initial response to iPhone 7 and iPhone 7 Plus,” and added that, “we sincerely appreciate our customer’s patience as we work hard to get the new iPhone into the hands of everyone who wants one as quickly as possible.”

9to5 Mac writes that Apple retail store employees had the task of telling those who had been waiting in line for days outside one of the Sydney, Australia, stores that even those who were at the front of the line would not be able to buy an iPhone 7 Plus. They also handed out AUS$100 gift cards in hopes of softening the blow at least a little.

It’s possible that walk-up customers will have more success at third-party retailers tomorrow, but be sure to check first, advises Apple.

Source: Apple says Jet Black iPhone 7 and all 7 Plus models sold out; breaking news to those in line
OP

This shows how much even Apple underestimated the demand for the iPhone 7 Plus.

To be fair, only a couple of analysts thought that there would be any huge demand, with most expecting lacklustre sales.

For some reason, this phone seems to have caught the public imagination in a way that few saw coming.

Well, you can't help but having some feelings for these people. Queuing up for days and nights and getting the bad news. Not something l would do.
But Apple did soften the blow a little with the gift card.

I sure hope my local Verizon or Apple store get some in stock for sale.

JohnnyApple said:
I sure hope my local Verizon or Apple store get some in stock for sale.
Click to expand...

I'm sure that the factories are beavering away as we speak. At least this will give Apple an idea of just how many they are likely to need to keep up with demand.

KevinJS said:
I'm sure that the factories are beavering away as we speak. At least this will give Apple an idea of just how many they are likely to need to keep up with demand.
Click to expand...

I'm reading that some pre-order customers have had their delivery dates brought forward, Mine hasn't changed though.

I'd be interested to know how much of an effect the Galaxy Note 7 recall had on iPhone 7 sales.

scifan57 said:
I'd be interested to know how much of an effect the Galaxy Note 7 recall had on iPhone 7 sales.
Click to expand...

I said as much to someone earlier today.

We’re excited to let you know that you’ll be able to upgrade to iPhone 7 soon.

Your new iPhone 7 Plus 128GB Jet Black with AT&T will be available for pick up at Apple Kenwood Towne Centre by Monday, September 26.

We will email you as soon as your iPhone is ready for pick up.

Jenningsville said:
Yippee... Apple just messaged me. My jet black 7 256gb has been brought fwd to 21sep from 26sep-3oct. I can't wait
Click to expand...

Mine is still October 4th-10th

Poisonivy said:
Mine is still October 4th-10th
Click to expand...

I had to wait almost a month for my iPhone 6 Plus when it came out. When it finally arrived, the wait was worth it.
You must log in or register to reply here.