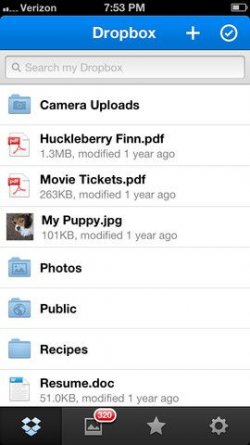 ​
Dropbox is a cloud storage service that has become increasingly popular amongst users wanting to keep their data safe. This week, Dropbox just released an updated build of its iOS version that adds enhancements in the interface and photo department. The Dropbox 2.0 version is available for iPhone, iPod touch and iPad running at least iOS 5.0.

In the new version, the interface has become increasingly eye pleasing, sporting blue color strips on the top. Former textual labels are now gone and replaced by clean-cut developers&#8217; icons. Users looking to upload a folder or a file will be able to do so very easily by tapping on the &#8220;+&#8221; button. The most exciting enhancement, however, that comes with version 2.0 is the new photo functionality. In the new build, Dropbox users will discover a photo tab that makes images easier to view and upload.

"With just a tap, you&#8217;ll be able to scroll through a timeline of all the photos you&#8217;ve automatically uploaded (including the pocket-dialed ones too). Our new speedy scroller will help you navigate all the way back to time immemorial (or your earliest photos) in seconds. Even if you have 'Billions and Billions' of them."

Also, the app will help you handle saving photos offline and will store them for later viewing. To save up space, Dropbox 2.0 will download a very tightly compressed version of the photo on your device. Users interested to get the newer Dropbox version should know that it is presently available for download in the App Store.

Source: Dropbox app in the AppStore
Last edited by a moderator: Dec 17, 2012
You must log in or register to reply here.