Everything started with two people. We made computer games for ourselves and our friends. Once we realized that it was the time to start making computer games for a wider audience and earn money doing it. We wanted to do something new and fresh and came up with the idea of iCube. Many of us when we were kids had a plastic cube toy that had a ball inside. The cube was a 3D labyrinth and the goal was to get a ball out of it. That was the idea we wanted to recreate. We designed a prototype and figured out what levels it would have. But wasnt all that simple. The main thing about creating this game was that originally we made it out of clear enthusiasm. Each of us has a full-time job besides our designer of the game is still a student. No wonder that we could work on this project only at nights and on the week-ends. One day the designer started not having any free time at all, and I was left with the project by myself. Having decided not to give up, I kept on working and found another designer, who was also a student. Later other people started joining our work, which suggested their own labyrinths. The game started growing, number of levels has increased.
By the way originally we had another name - Planet 3. But by the moment of registration of the company we realized that the name wasnt a good one and moreover pretty trivial. After looking through many variants we stopped with the name UNNYHOG Entertainment. One of the reasons why we chose this name was that it sounded so unique that even Google couldnt find anything. 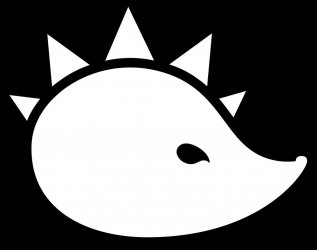 I think I shouldnt go in all the details and explain why the hedgehog has become our logo, its a long story but Id like to tell the story of how weve made it. The first drafts were very bad and didnt look like anything that we wanted to see on our logo. And then I asked my friend who liked hedgehogs to help us with the drawing. She made several sketches, and one of them looked like the one that has become our symbol. Weve been thinking a lot about the idea of our logo, but finally weve achieved exactly what we wanted to have. Overall four people were working on it, and spent about one month. But it was worth it, it went out very well. The main designer of the game quit his job and could totally devote himself working on our project. Weve changed the game interface and thats what weve got: 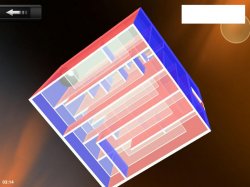 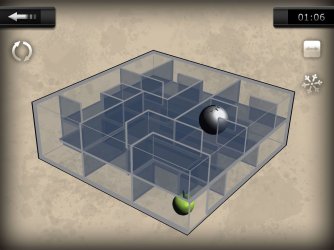 From the very beginning we wanted to launch the game in May, 2011. But we didnt manage to. The person who promised to make music for the game has let us down. It happens. Besides our website wasnt ready yet. But at the same time something very good has happened. At the end of April I came up with the idea of Watee. I shared it with the team, and the guys liked it. The game represents a puzzle based on the physics of water. The player needs to deliver to a certain place. From the very beginning we realized that the hero of the game should be a nice personage that would make a player to try finishing the level. The whole month weve been discussing what kind of game it will be and the same time were finishing working on iCube. At that time we decided to postpone the launch of iCube until September. In the beginning of July in the stores was released Feed Me Oil. We were shocked. But its obvious that a good idea could come up to many people. Actually they were not that similar, we had water, they had oil, and the idea is different. And weve made a decision  Watee must be released! We had a challenge  two people working part-time had to create from scratch the whole game. Another designer kept on working on cube and makes a website. He also had to create a funny character for the second game. 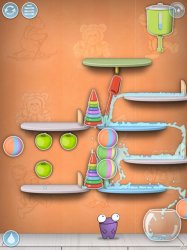 To tell the truth our mission wasnt that simple. But we set a goal and we had to go for it. The first month we were working on the physics of the water and were thinking about an overall design. Finally weve decided to make a cartoon-like character. The second month weve spent thinking of other game objects. It started with the simple-looking plates and shelves, then weve thought of water boiler that let us besides water have steam that also could be controlled. Weve decided to use a boiler not only as an obstacle but also as something that can help. Later weve added in the game a fridge which turned steam in water. Steam and soap bubbles are probable the main distinction of our game from others. July was the hardest month for us. First of all we were running out of time and nothing was ready, secondly, at that moment we got another hard blow. In the store was released Sprinkle. This game was even more similar to Watee. It was too late to stop, and we kept on working but we clearly understood whats waiting for us: people will think of us as of plagiarists.
Moreover it has become clear that the second designer couldnt create a character of the game, and it was a serious problem. But happily soon we figured out what to do. On the internet weve found a talented designer girl from Saint Petersburg. She liked the idea of our game and soon she has become of our team. She made a couple of sketches of several odd characters one of which has become our Watee. 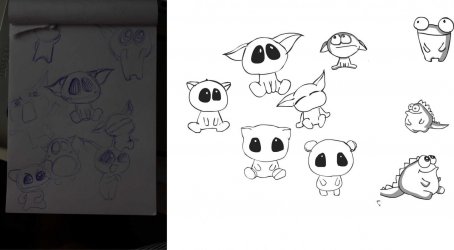 In August weve started working on animation of the character and think of the game levels. At this month weve also found a couple of composers who agreed to work with us. Unfortunately we couldnt use all the soundtracks they created, and weve chosen one of the composers from Ulyanovsk.

So, we made it till the deadline and sent the game to the store. By the way, here is a curious fact, names for the both of games were created in about 2 weeks before the release date. In a few days we got a refusal note for both of your games. iCube was using undocumented API, so we fixed it easily and resent it. Watee had issues with Game Center. But the problem wasnt concerned with the game, but the way Apple tested it, so after the second attempt it passed. After all two games were released on 26[SUP]th[/SUP] of September 2011, as we promised to. There was one more hit we had to stand, that even FMO and Sprinkle couldnt be compared to. It was Where is My Water, that was released about two days before us. The idea was even more like Watee and our cute character that distinguished us from others was not so unique any more. Its interesting that most often we are accused of stealing idea of Where is My Water. Overall we knew what we were doing and its silly to justify ourselves. But on the other hand we are pleased to hear people saying we can make a game like that in less than a week. So after games were in store iCube became popular right away it raised it to the 6[SUP]th[/SUP] place at RU AppStore. But Watee had issues : iPad version was barely sold, iPhone game owners complained that it was uncomfortable to spill water. The screen is not big enough and they needed to be accurate to get used to the controls.
We released an update, then the game was claimed to be too difficult. In the second update we reduced the amount of water, that the bowl should be filled with. And only these two updates positives comments showed up. By the way, thanks to all, who posted their comments, recommendations help the game to stay on top. Unfortunately Watee hasnt risen above 28[SUP]th[/SUP] position. In other countries, for example in US, we didnt make it to the top-200, though we were in top 50 in a genre. Recently we released updates to both games, they should become available very soon. I would add more languages, plus Watee will get more game tips. But the main news is that both games will become universal. Another update is going to become available in December, it would include a new room and levels. Itll make those people happy, who completed all levels and even collected all the apples. According to Game Center and Open Feint there are such people and they are not so little. To tell the truth we are happy with our games. But the main thing is that now we have experience that would help us to avoid mistakes in our future projects.

Wow, thanks. That was a pocketful!
You must log in or register to reply here.

All Halfbrick Games Are Free For 24 Hours, Including Fruit Ninja and Jetpack Joyride