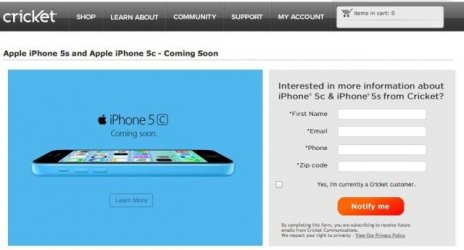 
Cricket Wireless carrier will offer the iPhone 5s and the iPhone 5c starting on October 25, the company announced yesterday. The carrier is not among the biggest in the country, but it still has almost five million U.S. customers.

At the moment no details have been revealed about pricing, so Cricket customers arent be able to pre-order the device. What they can do is register online on MyCrickets website (link at the end) for information about the availability of the iPhone handsets. Cricket offers devices without a contract, so the iPhone 5s prices should start at $649 and the iPhone 5c at $549.

Cricket first introduced an Apple phone to its customers in June 2012 - the iPhone 4S. The carrier added the iPhone 5 to its lineup in September 2012. This year, Cricket becomes the second prepaid carrier to announces that it will start offering the new iPhones to its clients, after Virgin Mobile on October 1. Boost Mobile could become the third one, if we are to believe to some inside information.

October 25 is also the day when the new iPhones will go on sale in another 35 countries around the world, as we have previously reported. Italy, Spain, Turkey and Russia being amongst them.

On July 12, 2013, AT&T agreed to acquire Cricket's parent company, Leap Wireless, for $1.2 billion. The deal is expected to finalize before the end of this year, but AT&T will most likely not interfere with the way Cricket conducts its business.

Are you a customer of Cricket? Are you excited about the news?

Source: CultofMac
Source 2: MyCricket
You must log in or register to reply here.

U.S. Cellular carrier gets the iPhone 5s and iPhone 5c on November 8th

Cricket Wireless Gets First Pre-Paid iPhone in the US

Virgin Mobile USA to Get Prepaid iPhone by July