Apple Watch Pre-Sales Have a Rough Start; 6 Hour Sellout and Many Ship Dates Pushed Back to June

We can't say the Apple Watch pre-order launch "went off without a hitch." In fact, there were quite a few hiccups. We have reports filtering in of folks not even being able to login to the Apple Store until 2:15am CT. This was despite trying to get online at 2am and hitting refresh for 15 minutes straight.

Eventually folks were able to log-on, and the initial pre-order screen gave them bright news of a May release date. Sadly, that too was turned sour for some. After finalizing the order, a new ship date of June was revealed (and this was after getting the order finished by 2:19am)! While this does match the 4-6 weeks suggested at the beginning, it definitely leans toward the longer end of that estimate.

That's not all of the bad news, though. Six hours after the Apple Watch went on pre-sale, it is now out of stock. Presumably, Apple is holding some of the watches back so they can eventually have a smattering of devices to sell in retail stores. In all fairness to Apple, they did forewarn us that they expected demand to outstrip the supply.

Even though there are obviously quite a few folks out there disappointed by how things turned out, we have to chalk up a victory for Apple again. Their newest gadget seems to be another big hit!
Last edited: Apr 10, 2015

I used the Apple Store app to pre-order my Apple Watch and had no trouble getting online the instant the pre-sale began at 01:01 local time. The whole ordering process took less than 30 seconds.
J

Pre-orders scheduled to start at 8am in UK.
I kept refreshing until Apple Store opened at 8.05.
My order confirmation email is time stamped 8.06.
4-6 week delivery! :-O
Keen to know if anyone in UK gets 24th April delivery (and with which watch).
N 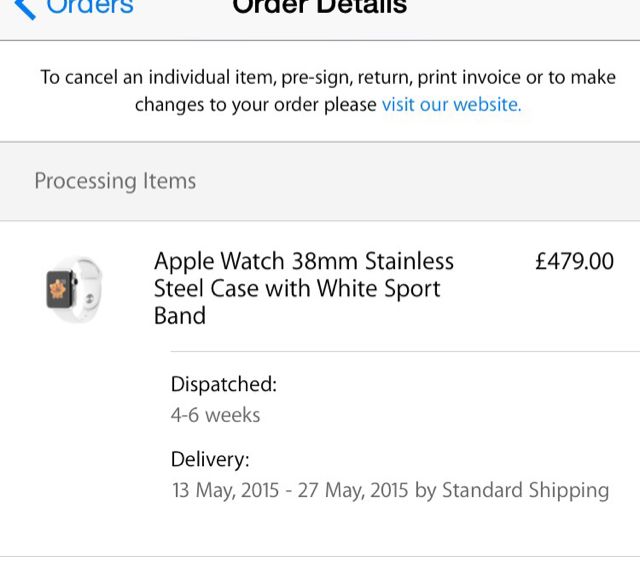 Got my order in, waiting time is gonna kill though! When do ape take payment? Is it before it ships?


Sent from my iPhone 6 using Tapatalk

They'll certainly take payment before they sent the Watch to you.
I suppose you'll receive an email with the details, or see it when you look at your account, depending on the payment option you chose.

Whenever I order from Apple, my credit card is charged just before the item is shipped.
N

Yeah, I thought they'd take it there an then so was surprised when money was still there! If I'd have known it was different I'd have ordered the more expensive one I would have liked cause 4 weeks gives more time to get the money saved!

I used the App Store to order my watch at 3:01 est ... The website wasn't updated to as in their was no pre order link anywhere to be found

fdolce1991 said:
I used the App Store to order my watch at 3:01 est ... The website wasn't updated to as in their was no pre order link anywhere to be found View attachment 18730
Click to expand...

It's not possible to order devices in the App Store. Did you order from the Apple Store app?
F

Yea that's what I ment by that sorry

fdolce1991 said:
Yea that's what I ment by that sorry
Click to expand...

No problem. I was only confused because you mentioned the App Store.
F

Hhahaha to many apps

fdolce1991 said:
I used the App Store to order my watch at 3:01 est ... The website wasn't updated to as in their was no pre order link anywhere to be found View attachment 18730
Click to expand...

Yes I was worried that everyone would get the sport watch and sell out fast and it did I work in a lot of water so couldn't wear it all day figured the only time I would wear it would be out on The weekend so needed something classy looking and the band can fit any size, I set an appointment tonight to go check them out
You must log in or register to reply here.

Apple Watch Pre-Orders Are Upon Us! Here Are The Times Pre-Orders Go Live For Your Region