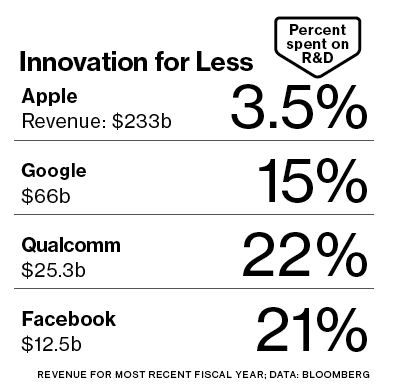 Bloomberg has a really interesting article today focusing on Apple’s research and development (R&D) spending, which it notes is remarkably low in comparison with the likes of Facebook and Qualcomm.

As Bloomberg notes, these figures call into question the widely held belief that in order to be successful and profitable a tech company must invest large amounts in R&D if it doesn’t want to be overtaken by its competitors.

It’s a belief that has never really held sway at Apple, with Steve Jobs saying back in 1998 that “innovation has nothing to do with how many R&D dollars you have.” Apparently Jobs used to enjoy backing up this statement by pointing out that when the Mac was invented, IBM was spending around 100 times more than Apple.

Instead, Apple favours relying on the technical advances made by its supply chain members. And because Apple is so wealthy and so successful, many of those supply chain members are only too happy to give Apple early access to their most advanced breakthroughs. Therefore its the suppliers who spend the big R&D bucks, and Apple that reaps the benefits.

“Suppliers are racing with each other to get Apple’s business, and part of the racing they are doing is spending more on R&D,” said Ram Mudambi, business school professor at Temple University, Philadelphia.
Click to expand...

Source: Apple Is Getting More Bang for Its R&D Buck
You must log in or register to reply here.