Siri is Having Problems With the Weather

MacRumors reports that according to posters on MacRumors forums, Siri appears to be having a bit of a problem with its weather reports at the moment. It seems that Siri is in a muddle as regards the weather, and is giving the wrong weather results for several different cities in the US. For example, if you ask about the weather in New York, New York, Siri pulls up the weather for New York, Texas, which is much hotter than in New York, New York, as you can imagine. The report says that it doesnt even help if you ask about weather in your area, for those in NY, NY, although they do manage to get the right results by saying their exact zip code. Other areas where users are also experiencing a similar problem include Richmond, Virginia, where Siri is showing the weather from New Richmond, Ohio; Carrollton, Texas, which gets the weather for Carollton, Indiana, and St. Louis, Missouri, which returns weather results for St. Louis, Georgia. Apple has yet to comment on the issue.

I must be lucky then, I haven't had any trouble when asking Siri for the weather in my city. 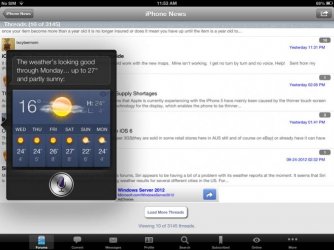 Siri Wants to be Part of Your Super Bowl Sunday Experience

Siri responsible for 25 percent of all Wolfram Alpha searches

Siris Comprehension and Accuracy Put to the Test