Siri Wants to be Part of Your Super Bowl Sunday Experience 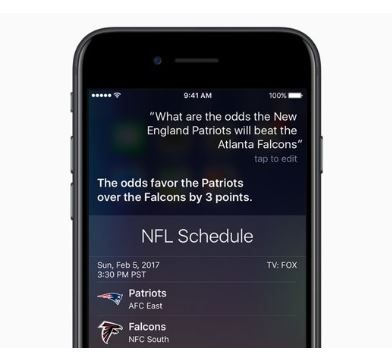 MacRumors reports that Apple has announced that Siri can be a big part of your Super Bowl Sunday experience if you want her to. First off there’s Live Tune-In support, where Apple TV users can ask Siri to play Super Bowl live by asking “Watch the Super Bowl.” This is the first time that Live Tune-In, which was launched last year, has been used for such a major sporting event.

Apple’s also been talking up other ways that Siri can be used on the big day, including asking her about team and player stats, half-time show details and even getting her to remind you to buy your snacks, as if you needed reminding of that!

Apple even suggests things that you can ask Siri, including “What is the Patriots record?” or “Who has more rushing yards this season, Tom Brady or Matt Ryan?”

This year’s Super Bowl is on Sunday, February 5 at 3:30 p.m. Pacific Time, and sees the New England Patriots facing the Atlanta Falcons at NRG Stadium in Houston, Texas.

Source: Apple Highlights Ways Siri Can Get Involved in Super Bowl Sunday
You must log in or register to reply here.

From now on users can watch the Super Bowl on iPhone

The Rock and Siri Dominate the Internet in New Apple Ad