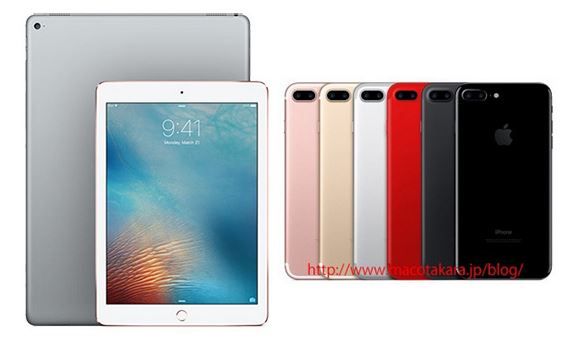 According to a new report from MacOtakara, via MacRumors, Apple has plans to announce several new products at a special event this March, including four new iPad Pro models, as well as a 128 GB iPhone SE and red versions of the iPhone 7 and iPhone 7 Plus.

Starting with the iPad Pro, MacOtakara says that the four models to be announced in March will be 7.9-inch, 9.7-inch, 10.5-inch, and 12.9-inch verrsions. The 10.5-inch model is not expected to launch until May, but the three other models will launch in March, according to MacOtakara’s sources. The 10.5-inch model is also said to have an edge-to-edge screen with no home button, which could be why the release date of that particular model is later than than the others.

The 7.9-inch “Mini” iPad Pro will have a Smart Connector, True Tone display, four speakers, and a 12-megapixel rear-facing iSight camera with True Tone flash. All of the four new iPad Pro models will also have quad microphones.

As well as the new iPad Pro range, MacOtakara’s source also says that Apple will be launching a 128 GB iPhone SE, and red iPhone 7 and iPhone 7 Plus variants.

Source: Apple Said to Debut New iPad Pro Lineup, 128GB iPhone SE, and Red iPhone 7 and 7 Plus at March Event
Last edited: Feb 20, 2017
You must log in or register to reply here.