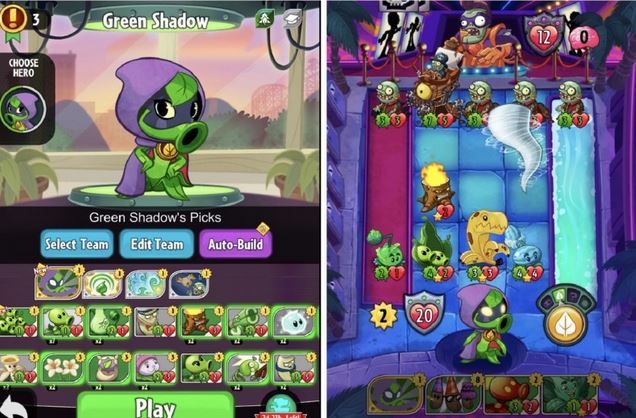 MacRumors reports that EA has announced that it is continuing to expand the ever-popular Plants vs. Zombies brand with the release of a new card-based strategy game called Plants vs. Zombies Heroes, along the same lines as the incredibly popular Hearthstone games. EA and PopCap Games say that the new game will be “accessible, with a lot of depth” in order to appeal to both card-battling-game novices and experts alike.

The game will feature new “Super Hero” plant and zombie classes, which will be similar to Hearthstone’s heroes. Among these new characters will be The Green Shadow, a powerful peashooter, and Infinity, a Zombie imp that is able to create a mini army of imp clones mid-battle. Over 300 unique characters with unique animations are included in the game, with each match being fairly short, lasting around 15 minutes each time.

Game modes include both single and multiplayer, and there will even be the chance for players to take part in tournaments.

Apparently around one third of the characters will be unlockable via gameplay, while others will be available in character packs that can be purchased in-app.

No official release date yet, but expect it very soon as it has already had a soft launch in New Zealand.

Plants vs. Zombies Gets Major Update

Plants vs. Zombies Finally Gets that Retina Display Update!

Plants vs. Zombies 2 Out July 18 Exclusively for iOS

Plants vs. Zombies is Free!