Next iPhone Could Have Force -Touch Display 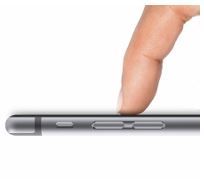 Phone Arena reports that Apple could be planning to include a force-touch display in the next iPhone. The story comes from UDN, via GFor Games, and says that the new display will be provided by China’s TPK, which provides force-touch panels for the Apple Watch.

Force-touch technology features a display embedded with sensors that can determine light taps from heavier taps, thus creating a new level of functionality.

According to the report, TPK will share the contract to provide the force-touch panels with another China-based company, GIS.

While the Apple Watch force-touch display costs around $4-$5 per unit, the display that would be used in the next iPhone would cost much more, around $13-$14, obviously because the iPhone has a much larger display.

The source for this story says that only the iPhone 7 Plus will have the force-touch technology, so the smaller version of the next iPhone will have a regular display.

Source: New rumors about the next iPhone sporting a Force Touch display pop up
You must log in or register to reply here.

iPhone 6s to Have Force Touch but no Dual-Camera

Next iPhone Could Have Glasses-Free 3D Display