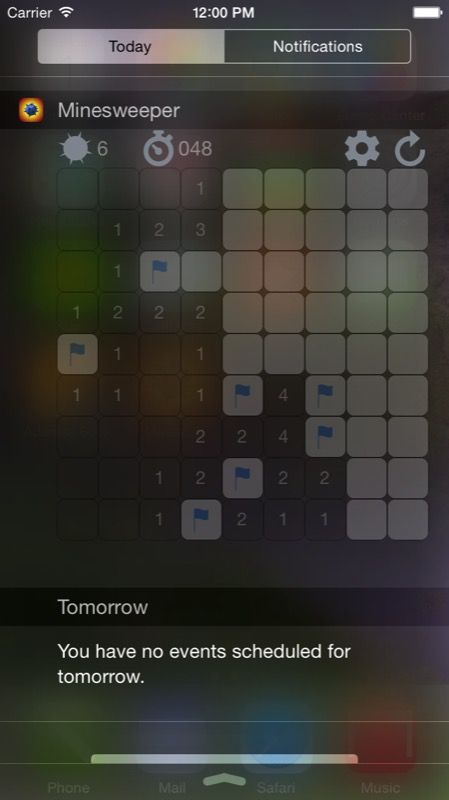 Speaking of Overglide, developer Alex Mather has just released his next Notification Center widget game Minesweeper Widget Edition. Judging by the title, you already know that it is the classic Minsweeper game, but as a widget for the Today tab.

The game can simply be played by adding the widget to the Today tab then pressing play. Players will tap away as they try to avoid bombs and make strategic moves to clear the board. Within the game settings, players can choose between Easy, Intermediate, and Expert modes. The settings also allow the player to choose the grid size for the playing field.

"We really pushed the limits of what’s possible in a widget with Overglide and hit some teething problems on some devices in the first release but we’ve learned a lot from that process and with Minesweeper – Widget Edition we’re confident it will be stable for everyone to enjoy from day one", said developer Alex Mather.

We were surprised by the fact that Apple didn't remove the first few Notification Center games from the App Store, since the area should be used for information-type widgets instead of games. Either way, Minesweeper Widget Edition is now available in the App Store for $0.99.
You must log in or register to reply here.

How to Play the Retro Snake Game Right Within Notification Center

iOS 8 New Feature: How To Install and Use Widgets