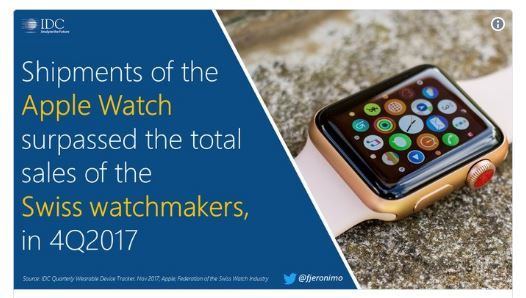 According to Canalys, 48% of shipments were the Apple Watch Series 3, and 52% were older models. All the Apple Watch shipment figures have to be estimated, because Apple does not release an individual breakdown of Apple Watch figures, preferring instead to group those figures in the “Other Products” category, along with the likes of Apple TV, Apple Watch, AirPods, Beats, and HomePod. With such spectacular unofficial figures, though, maybe it should start publicising them!

These estimates are most likely pretty accurate, with Canalys’ figures not far off from those Ben Bajarin of Creative Strategies and Horace Dediu of Asymco, who estimated total Apple Watch sales of 17.4 million and 17.7 million in 2017.

Underlining the significance of these figures, IDC’s Francisco Jeronimo tweeted that “for the first time, #Apple shipped more Apple Watches in 4Q2017, than the entire Swiss Watch Industry shipped watches! Apple is the biggest watch maker in the world.”

I dont like Apple watches or any watches like this. Very ugly and expensive but still, they are ugly. I prefer classic watches of the 80's 90's. Simple and classy looking.
You must log in or register to reply here.