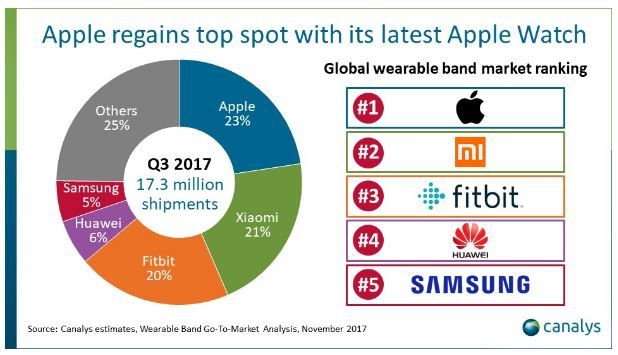 According to new figures from Canalys, via MacRumors, Apple has once again taken the lead in the global wearable brand market, largely as a result of the very strong Apple Watch shipments in this year’s third quarter. Canalys’ data shows that Apple shipped 3.9 million units in Q3 of this year, up on last year’s 2.8 million in the same quarter.

As a result, Apple now has 23% of the wearables market worldwide, just slightly ahead of Xiaomi on 21%, the previous occupant of the top spot. However, despite the popularity of the newly released Apple Watch Series 3 LTE, Canalys says that it was only responsible for 800,000 shipments due to supply constraints.

For this reason, Canalys analyst Jason Low said that “the Apple Watch Series 3 did not reach its full potential in Q3. It suffered limited availability as demand outstripped supply in major markets. Service providers had underestimated demand for the new Apple Watch.”

Source: Apple Retakes Top Spot in Global Wearables Market
You must log in or register to reply here.