More Than 100 Million iPhones Currently in Use in the US 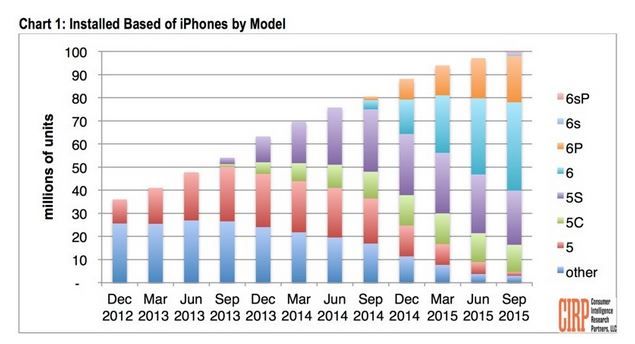 According to a new survey from Consumer Intelligence Research Partners (CIRP), via MacRumors, there are more than 100 million iPhones currently in use in the United States. CIRP’s figures show that at the end of the September 2015 quarter, over 101 million iPhones were in use, and two thirds of those were from 2014 and 2015.

CIRP says that approximately 58 million of the 101 million iPhones in use were iPhone 6 or iPhone 6 Plus, and four million were iPhone 6s and iPhone 6s Plus. And it would seem that the 4.7-inch iPhone 6 model is the firm favourite out of all of the models.

And as MacRumors notes, with CIRP only including data from September, with the iPhone 6s and iPhone 6s Plus only just being released at that point, it’s likely that the figures for Apple’s two newest phones will be much higher by now.

Source: Over 100 Million iPhones Now in Use in U.S., Nearly Two-Thirds Are iPhone 6 or Later
You must log in or register to reply here.

More People Own iPhones in the US Than Ever Before