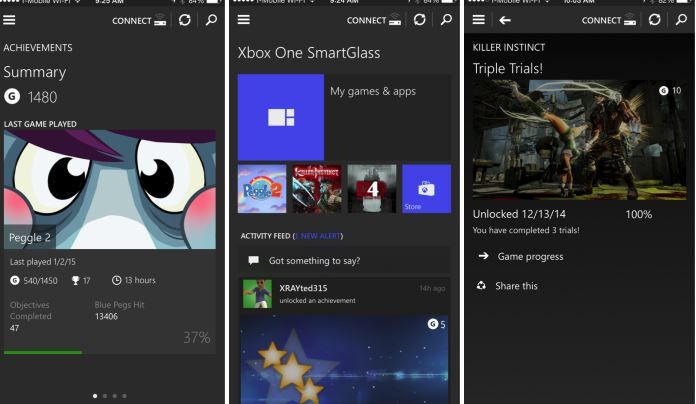 9to5 Mac reports that Microsoft has updated its XboxOne SmartGlass app to include support for iPhone 6 and iPhone 6 Plus.

The Xbox One SmartGlass app is a way for iPhone and iPad users to connect and control their Xbox One in their living room and also on the go. You can use the app to move around your Xbox One menus, control media playback on the console, and browse the web.

Other Xbox One services that can be viewed on your iPhone via the SmartGlass app include your activity feed, friends list, achievements, pins, messages, game clips, store OneGuide and settings.

Other recent updates for the popular app include adding the ability to buy and install Xbox One games remotely via your iOS device, being able to rate your favourite game clips, and also universal remote functionality for your TV and cable box.

Xbox One’s SmartGlass app is just one of many apps that have recently added iPhone 6 and iPhone 6 Plus support, including Facebook, Instagram, Hulu Plus, Google Chrome, to name but a few.

Source: Xbox One SmartGlass app updated with iPhone 6 6 Plus support 9to5Mac
You must log in or register to reply here.

The Xbox One SmartGlass iOS App is now available for download