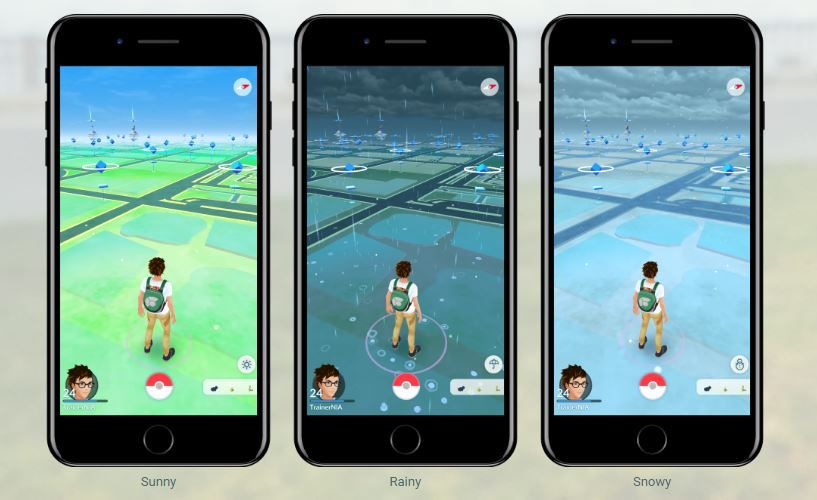 Niantic has today released a massive new Pokémon Go update with some very exciting new features as well as 50 new Pokémon from the Hoenn Region from Pokémon Ruby and Pokémon Sapphire. These include the likes of Treecko, Torchic, Mudkip, and many more, and Niantic says that more Pokémon will be arriving over the coming weeks.

A very cool new feature introduced in the update is a dynamic weather system which, aside from adding new weather effects to the in-game map, will also see nearby Pokémon affected by the weather in your location. This means that you might see more Mudkip on a rainy day, for example. Also, elemental attacks will be more effective during certain weather conditions, so you’ll find that a Charizard’s Fire Spin will be particularly effective on a sunny day.

“When we first started thinking about features we’d be introducing alongside the Pokémon originally discovered in the Hoenn region, a dynamic weather system that reflects real-world weather in-game was one of the first concepts that came to mind. This feature brings us one step closer to how we’ve envisioned discovering Pokémon in the real world–further connecting the digital world to the physical world you experience around you.

“We want changes in weather to have an impact on your gameplay experience. When it’s raining outside, the game world will match the real-world conditions. You’ll see rain falling from the sky and Water-type Pokémon appearing much more frequently, but that’s not all. While it’s raining, the Water-type Pokémon you catch in the wild or through Raid Battles will award more Stardust and have greater potential in battle. You’ll also be able to use your local weather patterns to your advantage in Gym battles and Raid Battles, as some move types will be more effective during certain weather conditions. We’re incredibly excited for you to experience this new dynamic weather gameplay system as it starts rolling out to Trainers around the world.”
Click to expand...

Two other very useful features included in the update are Battle Parties (Beta), where you can create and name teams of up to six Pokémon from your Pokémon collection for quick access in Gym and Raid battles. Also, you now have the chance to increase your Pokémon Storage from 1,000 to 1,500, but you’ll have to buy Pokémon Storage Upgrades in the in-game store in order to do so. And the free storage size will also be increased by 50 due to all the new Pokémon now available to catch.