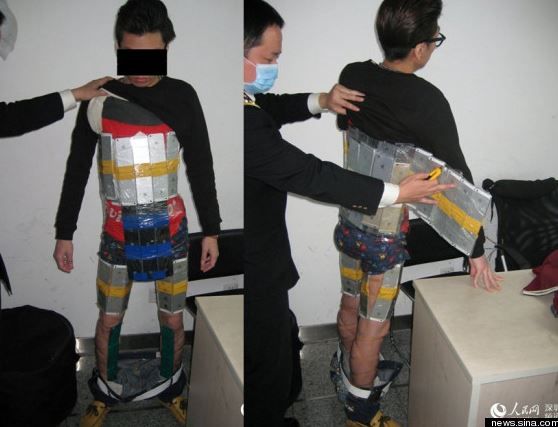 The Huffington Post reports today on the extraordinary case of a man who has been arrested in Futian Port, China, for attempting to smuggle 94 iPhones into the country by strapping them all over his body.

It seems that the man was only caught out because of his “weird walking posture, joint stiffness, muscle tension” and then the game was truly up when he was made to walk through a metal detector.

The would-be smuggler was apparently attempting to bring the phones into China from Hong Kong, where they are cheaper to buy, and can be more easily obtained on the black market.

iPhones are very expensive in China, with the Financial Times noting that an unlocked 16GB iPhone 6 will set you back the equivalent of $872, as opposed to $649 in the US. And with the average wage in China being around $4,755 a year, that means that an iPhone would cost approximately 18% of a Chinese worker’s salary.

Source: Chinese Smuggler Caught Wearing 94 iPhones
You must log in or register to reply here.

Beer Bottles Used in Attempt to Smuggle iPhones into China

Woman Smuggler Caught With 44 iPhone 4s Strapped to her Body