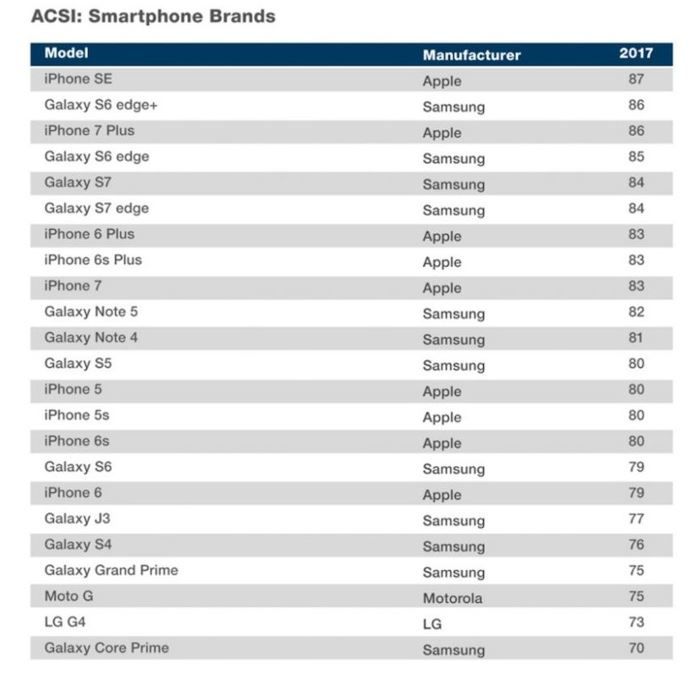 According to a new survey from ACSI, via AppleInsider, Apple’s iPhone SE has topped its Smartphone Brands customer satisfaction survey with 87 points. ACSI randomly polled 36,194 customers in the US from May 2016 to April 2017, and found that the iPhone SE came out on top, with the iPhone 7 Plus and the Samsung Galaxy S6 edge+ just behind, tied with 86 points.

“Over the past few years, the general trend for smartphones has been toward larger screens,” said ACSI managing director David VanAmburg. “Apparently, consumers were craving a new iteration of a smaller, less expensive phone as the iPhone SE - Apple’s first update to a 4-inch phone since 2013 - comes in first in ACSI this year.”

So this is a very clear message to Apple to not abandon the iPhone SE smaller form-factor altogether. The company has just begun to manufacture the phone in India, primarily to supply to the Indian market.

Source: Apple's iPhone SE, iPhone 7 Plus take top spots in customer satisfaction index
You must log in or register to reply here.

iPhone Comes Out on Top in American Customer Satisfaction Index