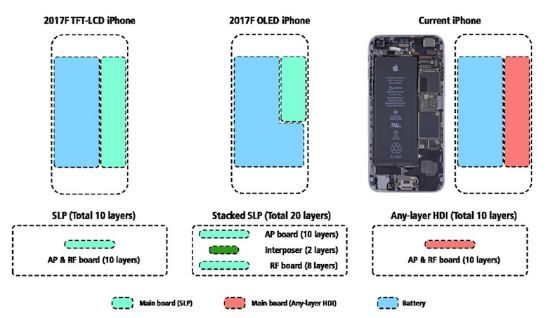 AppleInsider reports that according to KGI Securities analyst Ming-Chi Kuo, it looks as though Apple has had some success with increasing iPhone battery performance, just in time for the arrival of the iPhone 8. Kuo says that Apple has managed to reduce the form factor of its 2,700 mAh battery, meaning that it can now fit inside a much smaller phone than the iPhone 7 Plus, despite having the same capacity.

Kuo says that Apple has achieved this by using a stacked logic board known as a substrate-like PCB mainboard. Kuo adds that with battery technology not expected to develop any further over the next 3 to 5 years, it’s necessary to shrink components.

Also, by using a low-power OLED panel, Apple could have managed to extend the iPhone 8 battery life to make it even better than that of a 5.5-inch LCD iPhone, according to Kuo.

iPhone 8 Said to Pack Battery Capacity of Current 5.5-Inch Model Into 4.7-Inch Form Factor
You must log in or register to reply here.