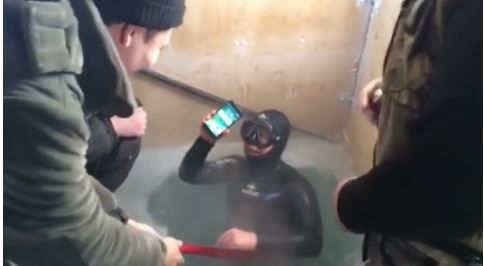 AppleInsider has a great story today about how an iPhone 7 Plus was retrieved in full working order after having spent 13 hours in a frozen Russian river. The phone belonged to a man in the Russian city of Yakutsk who dropped his iPhone through a hole in the ice while ice fishing on the river.

The man was not able to retrieve his phone himself, so he waited until the next day when his friend, a diver, was able to dive in and rescue the phone.

The diver, Fedor, posted on his Instagram account about retrieving the phone, saying that it took three tries to find the phone in the 4C (39.2 F) water. Once the phone was pulled from the water, it turned on immediately, and was in full working order. The phone has 35% charge when it fell into the water, and 19% when pulled out of the water.

Not bad for a phone that isn’t actually supposed to be a fully waterproof device, and only rated at IP67, which translates to only being able to survive immersion at 1 meter for 30 minutes.

Source: Ice fisher's iPhone 7 Plus survives 13-hour immersion after dunk in Russian river
You must log in or register to reply here.

iPhone 7 and iPhone Plus Survive Being Drowned, Dropped, and Squashed