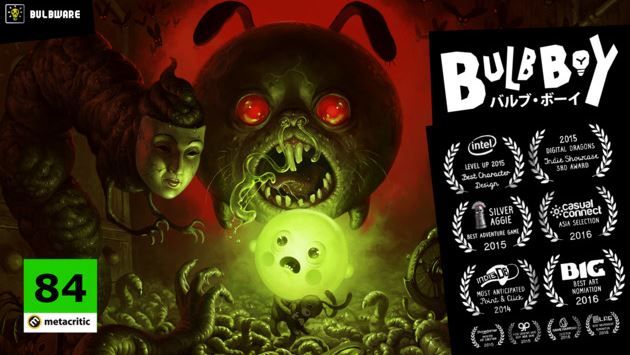 Polish indie developer Bulbware’s 2D point-and-click horror adventure game Bulb Boy has arrived in the App Store! The game already has a great reputation and following on Steam, and has won many awards, including the prestigious Best Character Design award at the 2015 Intel Level Up contest.

Bulb Boy is the adorable star of the game; when he wakes up from a terrifying nightmare on a gloomy night, he finds that evil has overshadowed the Bulbhouse. His family are gone, and there are scary monsters lurking in the shadows. It’s up to you to help Bulb Boy use his glass head to save all those he loves.

The game’s style, which has received many plaudits from the industry, was inspired by classics such as Machinarium and Gobliiins, with gameplay including puzzle-solving and fighting wicked monsters.

Bulb Boy is set in the mysterious bulbhouse, which is infested with dangerous creatures that you must defeat in a bid to restore light to Bulb Boy’s world, as well as save his Grandparaffin and Mothdog.

While Bulb Boy faces many challenges in the game, he has a lot of advantages on his side, including the fact that his head lights up, so that you can survive electric shocks, and which can also be unscrewed to use in some strange places. The further you progress in the game you’ll also be able to play as other family members as you relive your childhood memories and uncover more about the back story.

If you love classic 2D gaming with a horror twist, this is the game for you, it really is fantastic!

The Slaughter: Act One Comes to iOS

Runaway: A Twist of Fate Part 1 Out Now for iOS