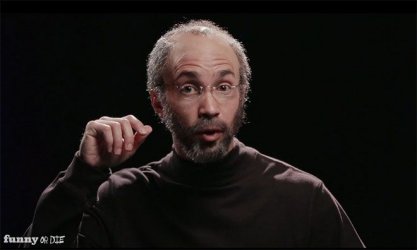 ​
The humor website Funny or Die just launched this week a new mock documentary, depicting events from the life of Apple former CEO and inventor  Steve Jobs. The film was due to be released this Monday, but got delayed two days, due to the Boston attacks.

So far, the movie entitled iSteve is the longest ever produced by Funny or Die and lasts up to 80 minutes. In the leading role, as Steve Jobs, we will find Justin Long. Hes the same face that appeared in the Mac vs. PC commercials rooting for Mac, of course. So, taking this detail into account, he seems the perfect choice for the role. Another neat surprise for fans of TV shows, is that the role of Steve Wozniak is played by Jorge Garcia. He is mostly known for his role in the mysterious Lost TV show where he &#8203;&#8203;plays Hurley. The script for the parody has been reportedly written in just three days, and the whole movie took only five days to film, so were not expecting something very professional.

iSteve is streamed online fully and users can watch it by accessing the Funny or Die website. So far, iSteve is the only available movie detailing the life of Apple founder Steve Jobs  even if its a parody. Theres, however, a more serious approach to Jobs biography. jOBS featuring Ashton Kutcher in the role of the ex-CEO has already been screened at the Sundance festival. The film is based on the official biography written by Walter Isaacson but no date for its public release has been made available so far.

Source: FunnyOrDie
Last edited by a moderator: Apr 17, 2013
You must log in or register to reply here.