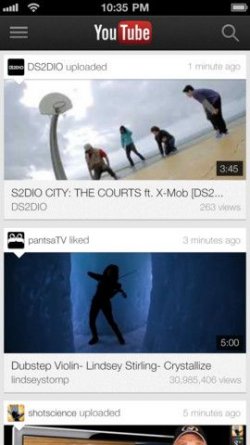 Good news comes to us from the Google quarters this week, as the tech giant announced it was releasing an updated and optimized YouTube app especially tailored for the iPhone 5 and the iPad. So far, only the iPhone and iPod touch joined the YouTube bandwagon, as the Apple tablet was mysteriously left out in the cold. The update has already become available on the iTunes page.

With the launch of its latest operating system, iOS 6, Apple decided to axe the pre-installed YouTube app, but it is now allowing the third-party version back in. Apple applied the same harsh treatment to Google Maps, which was axed entirely and was replaced by Apples own native app. The iPhone 5 fine-tuning was indeed needed to perfectly fit the wide 4-inch screen. The app also contains enhanced AirPlay support that enables the relaying of HD videos to the Apple TV sets.

Some other new features made their way to the YouTube app, like the ability to open your channels Guide simply by tapping the YouTube logo. Adding and removing videos from playlists has been ridiculously easy as well. Also, links users might find in video descriptions can now be clicked. Google is going to globally launch the YouTube app officially this week. It has been a very busy season for the search giant, who also released the Gmail 2.0 version app for iOS devices. Users already using the YouTube app can choose to upgrade via the App Store.

Source: YouTube app in AppStore
Last edited by a moderator: Dec 6, 2012
You must log in or register to reply here.