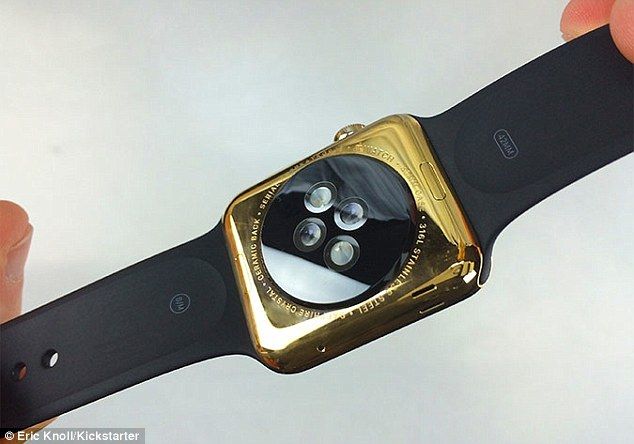 The Apple Watch Edition is the most expensive model of Apple's first wearable and it can even go up to $17,000. If you don't have that amount of money, but you'd still love to have a gold-plated Apple Watch, then this new KickStarter campaign could provide a more affordable way to do it.

Midas Touch is a Kickstarter project which consists in a $100 kit that you can use to gold plate the Watch yourself with 24K gold. Eric Knoll, the man behind the project, says the following:

"Turn the steel version of the Apple Watch into the gold version. How? Order the Midas Touch gold plating kit and do it yourself. Includes the real gold. Roll like a mega rich baller with your gold plated watch. They will not know it's not the $10,000 version, unless they remove your watch from your wrist and look at the serial number on the back."

The kit is only for the stainless steel Apple Watch models so far, but a solution for the aluminum Sport models is in the works, as well. You can pledge to the crowd funding campaign by following the link at the end, if this is something you'd be interested in.

One word of warning to those considering doing this; it will void your warranty and AppleCare+.

scifan57 said:
One word of warning to those considering doing this; it will void your warranty and AppleCare+.
Click to expand...

How so? In watching the video, you don't even have to disassemble the watch, just remove the watchband is all.

rasmith1959 said:
How so? In watching the video, you don't even have to disassemble the watch, just remove the watchband is all.


Sent from my iPad Air using Tapatalk
Click to expand...

Because Apple would likely consider the gold plating to be an unauthorized modification of the Apple Watch.
You must log in or register to reply here.

A Few Ways to Own a Gold Apple Watch without Spending $10,000

Industry Analyst Claims Apple's 'Edition' Version Watch Could Cost as much as $5,000 USD