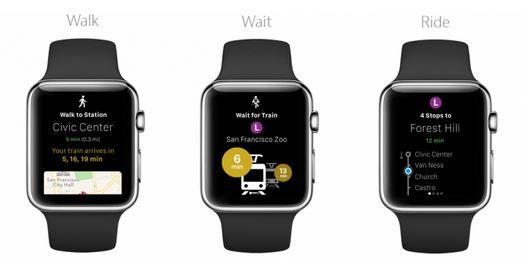 MacRumors reports on two in-depth Apple Watch previews from Citymapper and Transit apps that give a great insight into how well-known iOS apps are adapting to the smaller interface of the Apple Watch. Both previews appeared on Medium.

Starting with Citymapper, this app is already a personal favourite of mine on iOS for the way in which it helps to route every step of your journey in a city, including simply being able to ask the app to “Get Me Home,” so it’s really interesting to see how that resourcefulness has been adapted to the confines of the Apple Watch.

Citymapper said that it noticed that its iOS app users were frequently turning their phones on and off during a trip as they moved around various different means of transit, and this was something they thought about when creating the watch app.

“This is the nature of transit information when you move across the city. You need snippets of information. Different things at different times, depending on where you are along the way.

“Transit info works well on a device that focuses attention on one thing at a time. And when the transaction costs (ie hassle) of getting additional information is low (raise your wrist and swipe). Using a wearable app may also be safer. City dwellers are generally walking too fast, crossing streets, using stairs, jostling through crowds.”


Citymapper says that when you use Glances with its Apple Watch app it will show you “how messed up your city is,” providing you with stalled bus and train schedules in your vicinity. And one feature that could be particularly useful is being able to wrist-tap to find out when you need to get off your bus or train in an unfamiliar area.

As far as Transit App is concerned, MacRumors says that it will be more of a straightforward list of departure times and directions, with a “Take Me Home” button ever-present for when you get lost.

“With Transit App for Apple Watch…no matter where you are, you will have instant access to departure times for nearby routes—on hand at all times. Sprinting for the bus? Need to know which route is leaving soonest? Don’t want to interrupt your game of Candy Crush? We got your back.”

Citymapper and Transit App will both be available on Apple Watch launch day on April 24.

Sounds like it would be perfect for me if I lived in one of the supported cities.
P

As scifan57 says, it's perfect IF you live in one of the supported cities.
I'm a country dweller and have to. Rely on my wheels.


Sent from my iPhone 6 Plus using Tapatalk
You must log in or register to reply here.