Apple Will Announce its Earnings for the Second Fiscal Quarter of 2015 on Monday, April 27 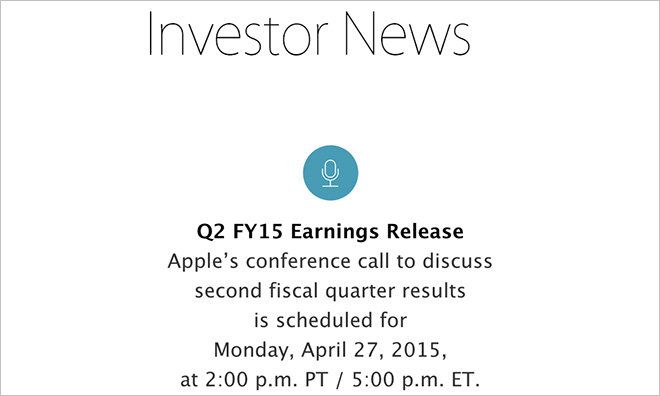 Apple has updated its investor relations page informing us that it will announce its earnings for the second fiscal quarter of 2015 on Monday, April 27. According to the new information, the quarterly earnings statement will be released sometime between 1:30 PM Pacific/4:30 PM Eastern. There's also going to be a conference call taking place at 2:00 PM Pacific/5:00 PM Eastern to discuss the report, as well.

You will be able to follow along through a livestream from Apple's Investor News website. During Apple's first fiscal quarter ending in December, Apple has managed to take in $74.6 billion in revenue, mainly thanks to record iPhone sales of 74.5 million units.

For the second quarter, Apple is expecting the revenue to be between $52 billion and $55 billion, and a gross margin between 38.5 and 39.5 percent. While iPhone sales will decrease, they are expected to increase when compared to the same quarter from last year. It will be interesting to see how will iPad sales look like, as well.

I'm sure total earnings will still be substantial, especially compared to it's competitors. I'll also be waiting to see the third quarter earnings release in July to see how the Apple Watch affects Apple's revenue.
Last edited: Mar 31, 2015
You must log in or register to reply here.