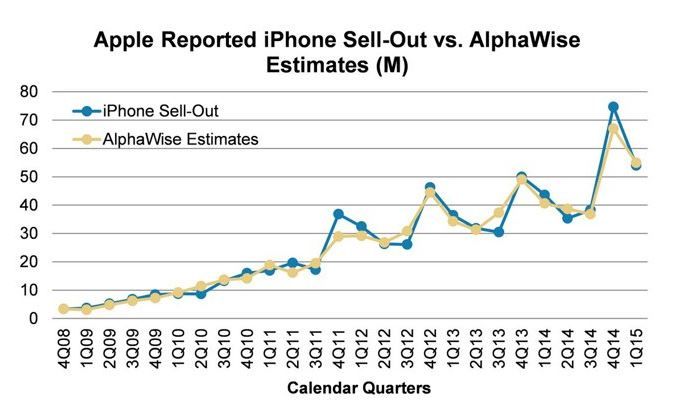 According to Morgan Stanley’s AlphaWise Smartphone Tracker, Apple is on course to sell more than 54 million iPhones in the current quarter, writes AppleInsider.

Morgan Stanley’s Kay Huberty thinks that Apple will only be able to add around 2 million units of channel inventory, making a total of 54 million units available in total; the consensus on Wall Street supports Huberty’s figure of 54 million. And while this total may fall short of the 55 million required, it would still be a record-breaking number for Apple, representing a 24% increase from last year’s 43.7 million iPhones sold for the same quarter.

Some analysts, such as UBS, are predicting even bigger iPhone sales for Apple, with that company expecting sales of 58 million. Apple has only broken the 50-million mark twice before, and both those instances occurred during the holiday quarter after the release of a new phone.

Source: Apple on track to sell record 54M iPhones in March quarter Morgan Stanley says
You must log in or register to reply here.