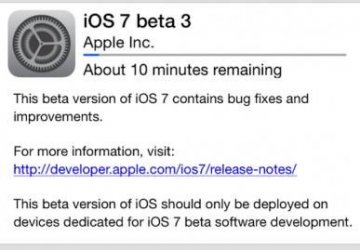 Nearly a month has passed since Apple revealed iOS 7 at WWDC 2013 in San Francisco. During this time, Apple released 3 renditions of the iOS 7 Beta firmware to developers. Today, the people at Apple have seeded iOS 7 Beta 3 to developers.

With each new version of the iOS 7 Beta firmware come bug fixes, improvements and sometimes even new, or changed, features. Folks already running any version of the iOS 7 Beta firmware can simply update to the latest beta by going to Software Update in the Settings app. The iOS 7 betas are available to anyone who wishes to pay the $99/year premium for an iOS Developer's Account. Plenty cheap services are offered on the web to just have a UDID registered for a device, allowing the firmware to be activated after installed.

So far here is a list of changes in the new iOS 7 Beta 3 firmware (via iDownloadBlog):

Just updated my iPhone5 with the latest version. It seems they have improved lot many bugs and now checking #skype shutdown issue. Hope they've solved this issue too.
You must log in or register to reply here.