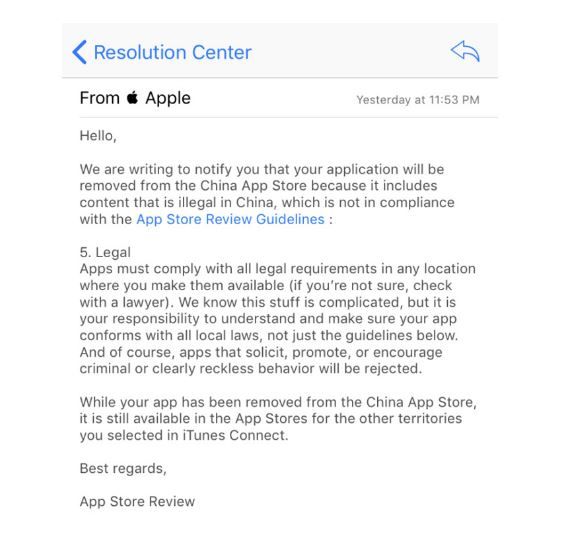 AppleInsider reports that Apple has pulled “all major” VPN apps from the App Store in China. The move is thought to be in order to comply with demands from the Chinese government, which has recently started cracking down on unauthorized VPNs, which people in the country have been using to get around the country’s “Great Firewall” censorship technology. Apple is also most likely having to comply with new cybersecurity laws that the Chinese government has introduced, such as foreign companies with Chinese user data being required to store the data on local servers.

Developer ExpressVPN said that it had been notified by Apple about the removal of its app on Saturday, stating that the app “includes content that is illegal in China, which is not in compliance with the App Store Review Guidelines.” ExpressVPN was told by Apple that the app is still available in other territories.

However, there is still some hope for those wanting to use VPN apps in China. Those who have already downloaded such apps from the App Store can still use them; they can still be used on jailbroken phones; workarounds can be used to get such apps from App Stores in other territories; or they can switch to Android.

Source: Apple pulls VPN apps from Chinese App Store in compliance with government crackdown
You must log in or register to reply here.