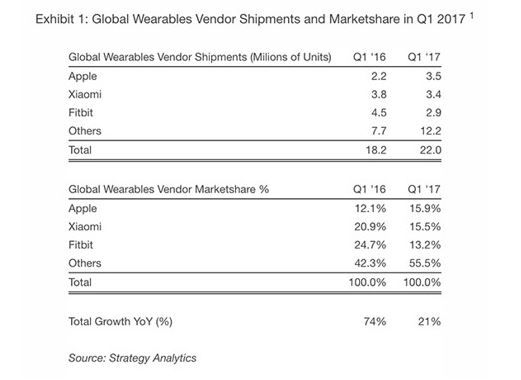 According to market research firm Strategy Analytics, via AppleInsider, Apple has just overtaken Fitbit to become the world’s largest wearables vendor for the first quarter of 2017.

The latest figures from Strategy Analytics show that Apple sold an estimated 3.5 million Apple Watch units in the quarter ending in March, an increase of 59% from the 2.2 million units sold in the year-ago quarter. This gave Apple 16% of the worldwide market.

Apple’s surge to the top spot was also facilitated by Fitbit’s big decline, year-over-year, with its shipments for the quarter ending in March falling to 2.9 million units from 4.5 million units in the year-ago quarter. Fitbit sales are said to have been affected by a trend towards smartwatches such as the Apple Watch and similar products from Samsung.

“Fitbit has lost its wearables leadership to Apple, due to slowing demand for its fitnessbands and a late entry to the emerging smartwatch market,” said Cliff Raskind, Strategy Analytics director. “Fitbit’s shipments, revenue, pricing and profit are all shrinking at the moment and the company has a major fight on its hands to recover this year.”