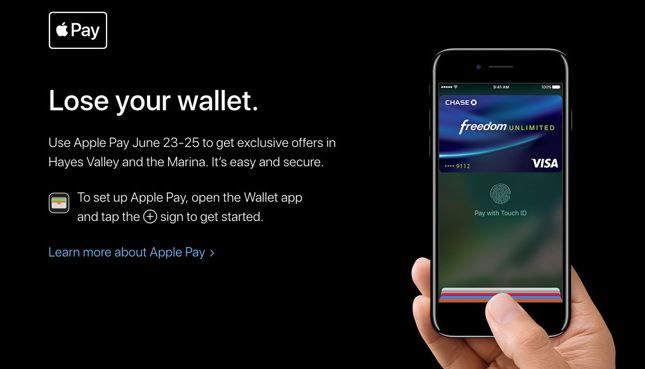 Apple has announced that next weekend it will be holding a special Apple Pay shopping event in San Francisco in order to promote the use of the service in stores and restaurants in the area, writes AppleInsider. As part of the event, merchants will be offering exclusive discounts for customers who use Apple Pay.

According to Apple’s “Lose your wallet” advert for the event, between June 23 to June 25, shoppers in Hayes Valley and the Marina will be able to benefit from the discount when using Apple Pay in-store.

Twenty merchants in Hayes Valley will be offering between 10% and 25% discount on goods and services, including the likes of Azalea, Blue Bottle Coffee, Dish, Minimal, and Welcome Stranger.

In the Marina there will be 16 merchants also offering discounts to Apple Pay users, including Over the Moon, Peet’s Coffee, Gala, and Pladra.

Other services involved include Spot Hero offering 50% discount on parking in San Francisco.