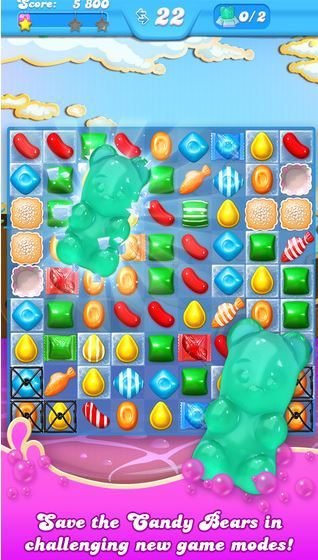 With the words “Candy Crush” trending worldwide on Twitter today for quite some time, there’s no mistaking exactly what mobile games company King is best known for. The reason for the infuriatingly addictive mobile game trending today is because Activision Blizzard announced that it is to buy King, the game’s creator, for $5.9 billion, with the deal being unanimously approved by both boards.

MCV reports that this sum breaks down to $18 per share for King’s remaining shares, which is a fifth higher than King’s closing share price on October 30.

Announcing the deal, Activision said that acquiring the maker of Candy Crush and Candy Crush Soda Saga would increase its presence on mobile. The company expects its mobile revenue to reach $36 billion in 2015, growing more than half by 2019.

A jubilant Activision also chirped that it now has two of the top-five biggest grossing mobile games ever in the aforementioned Candy Crush games, as well as the most successful console franchise, with Call of Duty, and the biggest PC gaming brand, World of Warcraft, not to mention StarCraft, Destiny, Hearthstone, Diablo, and Skylanders, to name but a few.

The acquisition will be finalised in spring 2016, and King’s CEO, CCO, and COO will remain in their current posts.

Source: Activision Blizzard buys King for $5.9bn
You must log in or register to reply here.