The Snowman and The Snowdog Relaunches on iOS 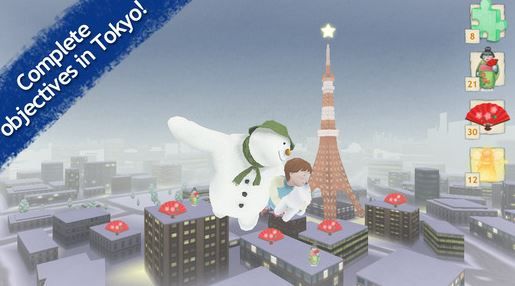 Channel 4’s The Snowman and The Snowdog is an iOS game based on the magical wintertime world originally created in the animated movie of the same name, which was the sequel to the Oscar-nominated animated movie The Snowman, released in 1982.

The game, which was commissioned by Channel 4 Games Commissioner Colin Macdonald and developed by the East-Midlands-based Crash Lab, is an updated version of the 2012 game, with players journeying with The Snowman and The Snowdog in 3D on their way to the North Pole, and collecting snowflakes to help them soar for longer.

Here’s a list of the new locations featured in the game, all beautifully rendered in hand-drawn style as the movie, and featuring music from the film’s score by Ilan Eshkeri and Andy Burrows:

o In London, the Gherkin and the London Eye
o In San Francisco, the Golden Gate Bridge, Alcatraz and Pier 39
o In Japan, the Tokyo Tower and the Imperial Palace
o In China, the Great Wall of China
o In Australia, Sydney Opera House and Harbour Bridge
Click to expand...

Colin Macdonald, Games Commissioner, Channel 4, said, "The Snowman and The Snowdog game was one of my first commissions after joining Channel 4, and one of the first big successes with almost 3 million downloads to date. I'm delighted to continue building on the game’s success for audiences old and new."

“It's great to work with The Snowman again, it's a game very close to our hearts,” said Steve Ellis, MD of Crash Lab. “We hope people have as much fun playing the game as we had making it.”

Looks like a lovely Christmassy game for kids of all ages!

Click here to download for £2.99 or local equivalent: The Snowman The Snowdog 2014 on the App Store on iTunes

Source: Channel 4
You must log in or register to reply here.