Researcher Said He Warned Apple About iCloud Vulnerability Months Ago 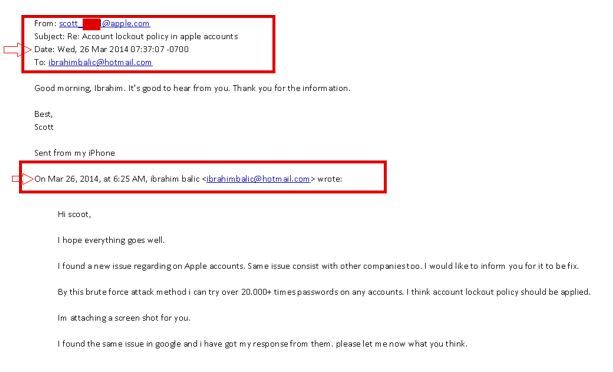 AppleInsider reports that a researcher has claimed that he warned Apple months ago about the iCloud brute-force vulnerability that is thought to have lead to the hacking of private photos of celebrities.

Computer security expert Ibrahim Balic has given copies of his correspondence with Apple on the matter to The Daily Dot, which seem to show that he warned Apple back in March that he had tested up to 20,000 passwords against accounts.

In late May, communication said to be from Apple employees shows that they did not think that the issue was that serious, with one engineer writing, “Using the information that you provided, it appears that it would take an extraordinarily long time to find a valid authentication token for an account. Do you believe that you have a method for accessing an account in a reasonably short amount of time?”

As AppleInsider notes, there is, however, no definite link between the bug found by Balic and the iBrute vulnerability that is thought to have been involved in the celebrity photo hacks, but which Apple says was a “targeted attack” that would have taken several years to execute.

Fans of the Late Steve Jobs Holding Birthday Party For Him Today; He Would Be 57