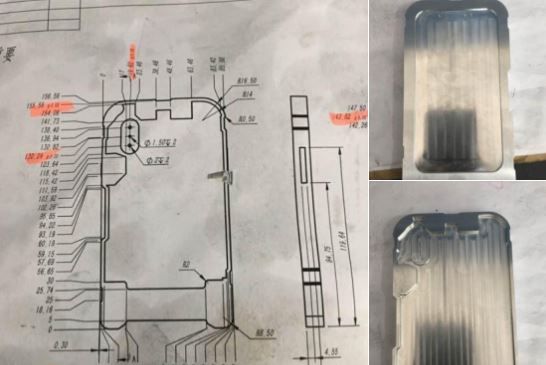 9to5 Mac reports that yet another supposed iPhone 8 schematic has emerged online, as well as photos of what is said to be a genuine iPhone8 mold, both courtesy of Benjamin Geskin, who leaked the photos on his Twitter account (@VenyaGeskin1).

The first of the three images posted by Geskin on Twitter shows schematics that reveal vertical dual-lens camera cut-outs, as well as Lightning port and power button cut-outs.

The second and third images appear to be CNC-milled molds that tie in with the schematics. Molds are used as part of the production process by manufacturers to finalize construction

Just as with the other recently leaked schematics, this one does not show a space in the rear of the case for a Touch ID sensor on the back of the phone, so hopefully that was a rumour and nothing more, as a rear Touch ID sensor doesn’t seem to be too popular with Apple customers!

Source: iPhone 8 mold shows vertical dual-lens camera spotted on previous leaks
You must log in or register to reply here.