Apple Watch Sensors Could be Affected by Tattoos 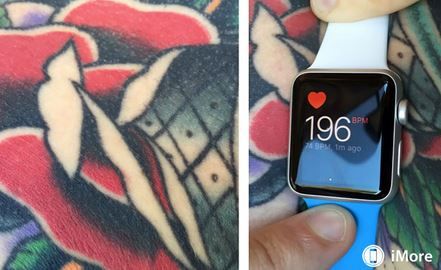 According to iMore, the Apple Watch sensors could possibly be affected by certain types of arm tattoos. Apparently the ink pigmentation can cause problems with the watch’s plethysmograph sensor, and in particular with how the sensor reads your heart rate and thus establishes whether or not the watch has contact with your skin.

iMore says that word of the issue first emerged on Twitter and Reddit, and iMore confirms that it has carried out its own simple tests and has found that if a tattoo is solid and darkly pigmented it can cause some problems, producing very high heart-rate readings of 196 BPM in one instance.

Essentially, the watch’s sensor works by using spectrums of light to track your blood flow under your skin. Certain types of ink pigmentation can reduce the reflectiveness of the light, and thus cause problems with the sensor.

Apparently it is only artificial ink pigment that causes this problem, not natural skin pigment.

Source: Apple Watch heart rate sensors and wrist tattoos What you need to know iMore
You must log in or register to reply here.

Valencell, a Biometric Sensor Company, Accuses Apple of Stealing Their Tech for Use in Apple Watch