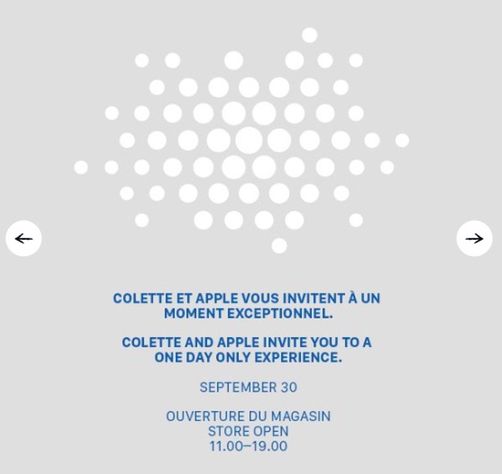 Colette, a popular fashion boutique in Paris is about to kick off its "one day only experience" tomorrow, September 30. French blog Macplus reports that the event will take place from 11:00 AM to 7:00 PM at Colette's gallery on rue Saint-Honoré in Paris.

Although the boutique hasn't leaked any information on what is to be shown at the event, the invites sent out to attendees seem to resemble the Apple Watch Homescreen. At the top of the invite, there is a pattern of dots that do look a lot like the honeycomb of apps shown on the Apple Watch at the iPhone 6 event earlier this month.

MacRumors forum member Rogifan did some investigating, looking through Apple industrial design team member Mikael Silvanto's Instagram, finding several photos of his trip to Paris for Paris Fashion Week. One of the photos shows an Apple team member, eating a meal in Paris with a cigarette in his mouth, beer in hand, and an Apple Watch worn on his left wrist.

More photos show Jony Ive and Marc Newson in the background, so it looks like the Apple Watch might be making a huge splash at the event. The Apple Watch was unveiled earlier this month and will be released "early 2015".
You must log in or register to reply here.