Apple Extends its iPhone Trade Up Program to France, Italy, and Spain 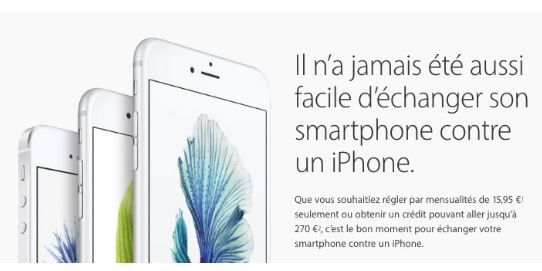 MacRumors reports that Apple has today extended its “Trade Up With Installments” programme for iPhone to three new countries, France, Italy, and Spain. This means that people in those countries can now trade in an eligible older iPhone, Android, or Windows Phone handset and put the trade-in amount towards a brand new iPhone, which will be paid for across a 24-month payment plan.

An example of how this would work in Italy, say, is that someone trading in a used 16GB iPhone 5s for a new 16GB iPhone SE would only have to pay €16.98 per month for 24 months for the phone. With interest applied, this would mean that the phone would cost €425.52 in total.

The program, which was previously only available in the US, is only on offer until August 31 in the three new countries in question. It’s worth noting that as this is basically Apple’s way of loaning you the money so that you can buy your new iPhone, you’ll have to pass a credit check in order to take out the plan.

Source: Apple Expands iPhone Trade Up Program to France, Italy, and Spain
You must log in or register to reply here.