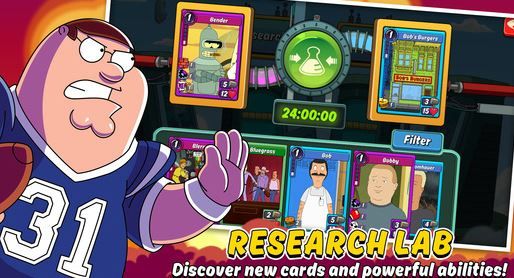 If you’re a fan of Fox TV’s animated comedies such as Family Guy, American Dad!, Bob’s Burgers, Futurama, and King of the Hill, then Kongregate has just the game for you waiting for you to download for free from the App Store.

Animation Throwdown, which is one of Apple’s highlighted “New Games We Love” this week, lets you play as your favourite character from one of those five series as you attempt to create the ultimate show-themed deck, and then compete with your deck against friends and other players.

“We are thrilled to bring together these five animated comedies for the first time in Animation Throwdown: The Quest for Cards.” said Emily Greer, president and co-founder of Kongregate. “We are looking forward to integrating characters from these hit series in a unique and exciting way that fans of all the shows will really love.”
Click to expand...

The game is co-developed by Kongregate, along with Chicago’s Synapse Games (Tyrant Unleashed, Global Assault, Spellstone) and San Francisco’s Chinzilla Games (Little Alchemist). Both Chinzilla and Synapse are veteran card-battle game developers, and Animation Throwdown combines the most popular gameplay elements of their previous titles.

“In Animation Throwdown, Peter Griffin will duke it out with Bob Belcher, or Leela, or even Hank Hill. Fans get to select their all-star lineup in this inventive, genre-bending game,” said Rick Phillips, Executive Vice–President, Fox Digital Entertainment.
Click to expand...

They’ve clearly done a great job, as it has a 4½-star rating on the App Store, although there are some negative comments about the in-app payment aspects of the game, as usual for these types of free-to-play games.

Source: Kongregate
You must log in or register to reply here.