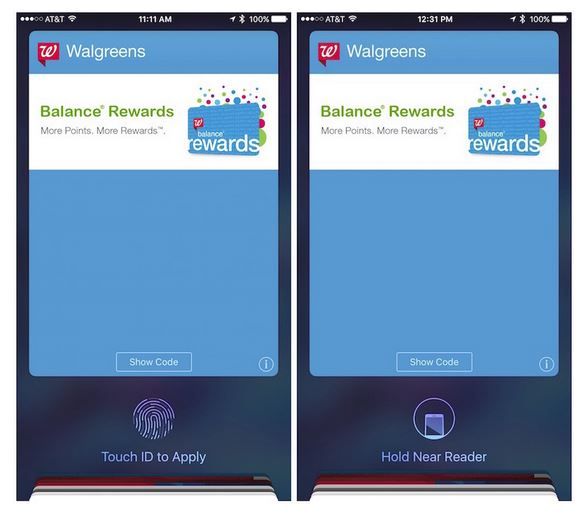 MacRumors reports that Walgreens has today joined Kohl’s as one of the first retailers to add support for Apple Pay to its own-branded credit card and loyalty card respectively, which is one of the new Apple Pay features introduced via iOS 9.

As far as Walgreens Balance Rewards card is concerned, iPhone users have already been able to log onto their rewards accounts from the Walgreens iOS app, as well as incorporate their Balance Rewards number in the Passbook/ Wallet app.

Now, however, Walgreens has gone one step further than that, according to some eagle-eyed MacRumors readers who have noticed that the Balance Rewards card in their Wallet app on their iPhone now shows that it supports NFC via Apple Pay.

If you then double click your iPhone home button to open Apple Pay cards, you will be prompted to access the Walgreens Balance Rewards pass, after first having used Touch ID to authenticate that you are the rightful owner of the card. All you need to do then is hold your phone near to the NFC reader to use Apple Pay via the app.

However, it seems that the system is not yet completely set up at Walgreens, as MacRumors says that when they tried to use their Balance Rewards card on their phone, they got an error message and a prompt to select a different payment method.

Source: Walgreens Gearing Up for Apple Pay-Linked Loyalty Rewards Cards
You must log in or register to reply here.