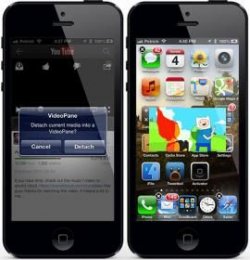 ​
Famous Jailbreak tweak developer Ryan Petrich is known for making very useful OS modifications. This time around Petrich brings Jailbreak-users out there a new tweak called VideoPane. VideoPane is a Cydia tweak that will allow users to "detach" a video on an iOS device playing on Netflix, YouTube, iTunes, etc. Basically the Cydia tweak allows users to play a video in its own separate window, while still allowing for other applications to be open.

This tweak is similar to the dual-mode feature on the Samsung Galaxy S4, where users can run two applications on a single screen at the same time. VideoPane is now available on Cydia under the BigBoss repo for $1.99.
You must log in or register to reply here.