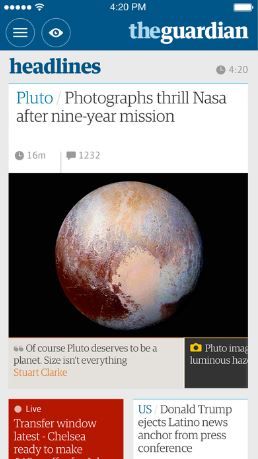 According to a report on AppleInsider, the UK’s Guardian newspaper has decided to withdraw from both Apple News and Facebook Instant Articles.

“We have run extensive trials on Facebook Instant Articles and Apple News to assess how they fit with our editorial and commercial objectives,” said The Guardian in a statement issued to Digiday. “Having evaluated these trials, we have decided to stop publishing in those formats on both platforms.”

“Our primary objective is to bring audiences to the trusted environment of the Guardian to support building deeper relationships with our readers, and growing membership and contributions to fund our world-class journalism.”

While it is definitely possible for a newspaper such as The Guardian to earn money from Apple News and Instant Articles, it probably stands to gain more by having its loyal readership use its own app and website, from where it can make more money from ad revenue and also try and encourage readers to subscribe or donate.

The Guardian is still a member of Google’s Accelerated Mobile Pages, and in March it announced that 60% of its traffic came from that particular source.

Source: UK site The Guardian drops Apple News in bid to boost ad & subscription revenues
You must log in or register to reply here.

The Guardian Launches Updated iPhone App With In App Subscriptions