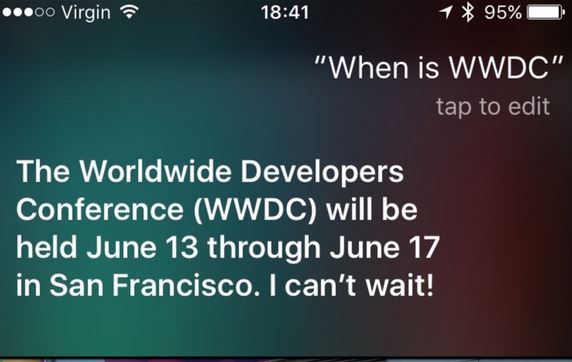 And while Siri hasn’t given the exact location, it’s most likely that the WWDC will be taking place at the usual venue, Moscone West.

It looks as though Apple definitely intended to announce the WWDC dates in this novel way, as earlier today when Siri was asked “When is WWDC?” she was still replying “WWDC is not yet announced.”

It’s expected that Apple will be revealing iOS 10 and OS X 10.12 during WWDC, among other things, possibly including the announcement of a new MacBook range. It’s unlikely that there will be any revelations about future iPhones, or iPads, however.

Source: Siri announces WWDC 2016 will be held June 13th through June 17th in San Francisco
You must log in or register to reply here.