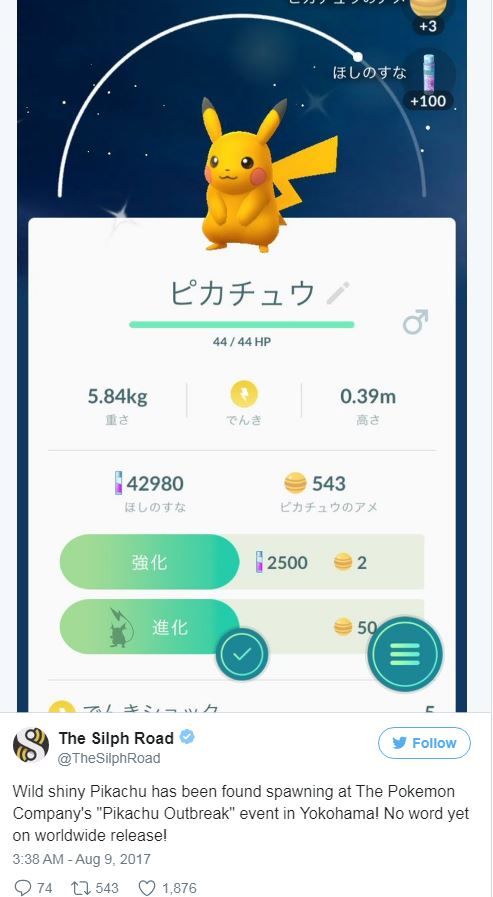 Niantic is currently hosting a Pikachu Outbreak event that runs through until Tuesday, August 15, in Japan. For the duration of the event, Pokémon Go Trainers in Japan will be able to visit Pokémon Go Park events in Minato Mirai, Yokohama, Japan.

During the event, Trainers will also get the chance to capture some of the region-exclusive Pokémon not normally available in Japan, such as Mr. Mime. Spinning the Photo Disc at PokéStops also gives Trainers the chance to collect special 2 km Eggs that might hatch more varied Pokémon than usual.

And that’s not all the goodies on offer at the event, as The Silph Road, via Eurogamer, reports that a Shiny Pikachu has also been spotted in the region, only the second Shiny creature to appear in Pokémon Go, following on from Shiny Magikarp. He’s actually got a very subtle golden shading, barely discernible from the regular Pikachu. No word as yet about when Shiny Pikachu might be appearing in the rest of the world.

Sources: Niantic, Ultra-rare shiny Pikachu released in Pokémon Go
You must log in or register to reply here.

New Pokémon Are Here, Including a Festive Pikachu!