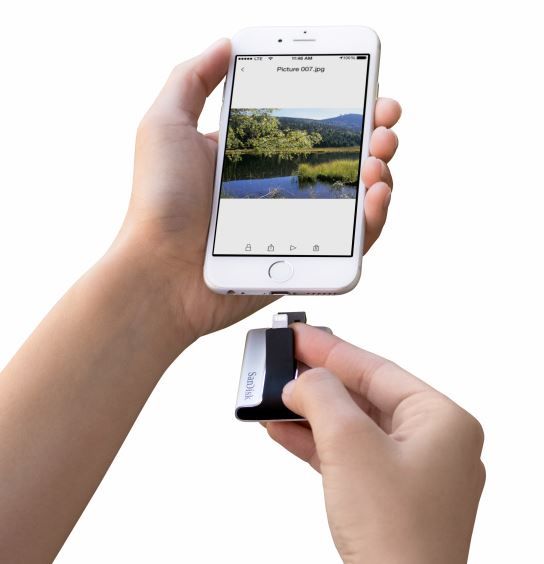 9to5 Mac reports that SanDisk has today launched an iPhone/iPad-compatible product, iXpand, that incorporates a Lightning connector into a USB Flash Drive.

As with other similar products on the market, the iXpand enables you to transfer content from your iOS device and computers that only have a USB port.

As 9to5 Mac notes, while it’s much easier these days to transfer content via the cloud, it never hurts to have a physical device too, for example for backing up files that can be viewed on your iOS device, or when watching video content on a plane, to name just two of many possible instances.

9to5 Mac says that the iXpand also comes with a companion app that can be used to stream and view files directly from the drive on an iOS device.

SanDisk is proud of the iXpand’s design, saying that it “was designed with a unique flexible connector so it can connect directly to iPhone or iPad without first removing the protective case.”

Best Buy will be selling the $79 32GB SanDisk from November 16, and 16G and 64GB models for $60 and $120 respectively will be available soon directly from SanDisk.

This works in a similar way to the Mophie Space Pack but isn't built into a battery case like the Mophie.

This is excellent!!! Is this going to work with ipad as well? I hope so.

Claire101 said:
This is excellent!!! Is this going to work with ipad as well? I hope so.
Click to expand...

The news article says it's compatible with iPhone and iPad.
You must log in or register to reply here.

Rumour: iPhone 8 Could Have Smart Connector to Support Wireless Charging